Out with the Old - In with the New

Bridging the gap between old and new technology

Evolving technology and the demands of a busy stockroom don’t always go hand in hand; after years of service, Woodies’ hand-held scanners were starting to cause problems across the board; VisionID were on hand with a novel solution, creating a bridge between old and new technology.

“What this emulation means is that Woodies and VisionID have bridged the gap between the old technology and the new. We have the hardware in place now, meaning we can take our time in terms of evaluating new software functionality. It future proofs us.” - Gavin Lambkin, IT director for Woodies Ireland

Stock control is important area that retail technology has been applied to for decades. In the case of Woodies, like many others, this technology took the form of hand-held terminals called Piccolinks that had been in use for several years. “We used them for pretty much everything in the Woodies environment,” says Gavin Lambkin, IT director for Woodies Ireland. “They’re used for stocktaking, labelling, goods in and everything else.

“Now, Woodies isn’t a high fashion store,” Lambkin quips. “It’s a harsh environment. It’s big and dirty and dusty, and these terminals would take a lot of punishment. They get dropped and knocked about the place.”

“The Piccolinks had to be repaired a lot,” Lambkin adds, “but to be fair to the technology we’ve had them in place since 2003 so they didn’t owe us any favours!”

Despite this long-standing reliability, Lambkin explains that the company started finding it difficult to have the terminals repaired, due to the advancement of overall systems. “We had a maintenance contract in place with VisionID since 2007,” Lambkin says, “and they basically told us that they could continue to support the old handhelds for another year or so, and then we’d have to start looking at an alternative solution.”

As we observed, the advancement of technology is having myriad effects across every industry you could think of, but Woodies discovered that this evolution was going to make it tricky to replace the hardware. “We had our ERP system [Enterprise Resource Planning],” Lambkin says, “and the software we were using was quote an old version of Microsoft Dynamics. We ran into an issue where basically the latest software wasn’t compatible with the older hand-held terminals.”

The reverse of this was also true: the newer terminals that would replace Woodies’ old workhorse Piccolinks were not compatible with the older software, which required VisionID and Woodies to take a step back and find a novel solution that would allow Woodies to incrementally bring their system up to date rather than replacing the software and the hardware at once – a time-consuming and costly project.

“We had to do some research and a bit of headscratching,” says Lambkin, “because upgrading the software would have incurred further licensing and development costs.”

Eventually VisionID came to Woodies with the solution, which was to use software emulation through a UK company. “It means we can swap out the hardware and put in new scanners without upgrading the back-end software,” Lambkin says. “The menu system and functionality remain the same but you’ve got more reliable and secure hand-helds.”

What this emulation means is that Woodies and VisionID have bridged the gap between the old technology and the new. “We have the hardware in place now,” Lambkin says, “meaning we can take our time in terms of evaluating new software functionality. It future proofs us.”

This novel solution to a practical problem gives Woodies time to look to the future in terms of its entire IT approach. “The idea is seamless integration between the in-store and online software,” Lambkin says in closing. “We’re constantly looking at ways we can improve the entire customer experience.” 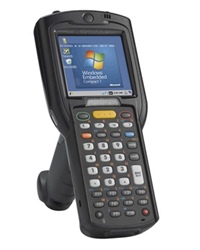 What our clients have to say

SureTraceID is easy to integrate and to use. In short it just works! Due to the automated reports, we were able to demonstrate to employees, or even HSE reps that we had an adequate and reliable contact tracing system in place. The solution does what it needs to, and contributes to the prevention of transmission in the work place. — Neville McIlwrath

VisionID’s remote training session was well organised, and delivered with the highest level of professionalism. All of our questions were answered, and the follow up to the training was excellent. Looking forward to future training events.”- Michael, Sanofi

“VisionID helped us significantly improve our warehouse operations by enabling us to capture data and feed it into our ERP in real-time. After a consultation and Wireless Site Survey, VisionID implemented a secure wireless network for real-time data capture using Extreme Wireless infrastructure and Zebra MC9200 mobile computers. We now have improved inventory control and increased productivity within our warehouse.” – Stella Glavin, IT Manager