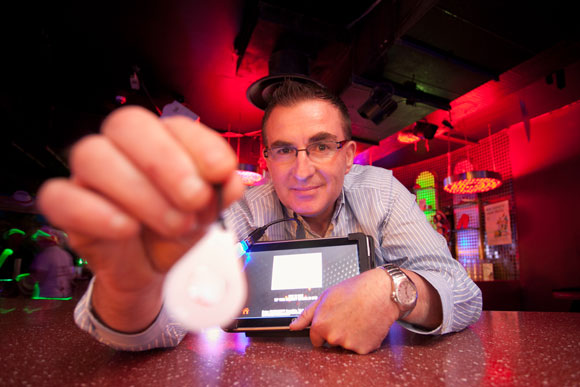 It is one of the first, if not the fist, experiential campaign in Ireland that utilised RFID technology, allowing consumers to share their experience live on Facebook. The results we have seen in terms of awareness and engagement are fantastic and VisionID were a crucial component in helping us to bring the technology to life.

Some of Ireland’s top nightclubs, including Dublin’s Krystal and Cork’s Havana Browns, have achieved a technology first: clubbers will be able to use RFID tags to trigger Facebook status updates to tell friends what food or drinks they are enjoying and be able to share other content, like photos.

Clubbers in venues involved in the project, from Cork to Belfast, and Limerick to Dublin, can sign into their Facebook accounts as soon as they arrive at the venue and their accounts are synched with an RFID key fob. Every time they swipe the fob on a staff member’s tablet computer it updates their accounts to upload a photo, food or drink image or description or information about prizes they may have won on the night.

Among the clubs involved are Sense in Cookstown, Co Tyrone; Mynt in Belfast; Krystle in Dublin; Havana Browns in Cork; The Foundry in Carlow; The Icon in Limerick, as well as the CHQ building in Dublin’s IFSC.

“The technology challenge involved in connecting Irish clubbers with their online social network in real time was to deliver wireless coverage in 100pc of the nightclubs.”

VisionID has worked with major retailers, hospitals, pharmaceutical firms and distribution companies, but the Ogilvy project was their first for the nightclub industry.

We used the Zebra AP5131 wireless access point throughout the venues in conjunction with a number of tablet computers. The Zebra AP5131 provides all the latest wired and wireless security standards, as well as the speed required to support the most demanding applications, including voice and video.

The ability to take advantage of the AP5131’s mesh features allowed us to seamlessly work in each venue without the need to run cables – something which was not an option.

The Mesh Network we put in place provided full, wireless coverage throughout the nightclub, over multiple floors. We had no issues overcoming the challenges provided by a large number of people gathered together accessing both the network all at once across the various floors.
Robert Jones, VisionID Managing Director said he hopes the innovation will spur more venues to invest in cutting-edge technology savvy clubbers will come to expect as they connect, not just in the same venue but with their online social network on a night out.

Technology clubbers will come to expect?

Ogilvy Dublin is constantly searching for new ways to tap into and realise the power of social media and word-of-mouth marketing.

What our clients have to say

VisionID’s remote training session was well organised, and delivered with the highest level of professionalism. All of our questions were answered, and the follow up to the training was excellent. Looking forward to future training events.”- Michael, Sanofi

“VisionID helped us significantly improve our warehouse operations by enabling us to capture data and feed it into our ERP in real-time. After a consultation and Wireless Site Survey, VisionID implemented a secure wireless network for real-time data capture using Extreme Wireless infrastructure and Zebra MC9200 mobile computers. We now have improved inventory control and increased productivity within our warehouse.” – Stella Glavin, IT Manager

“We trust VisionID for all of our printing and scanning needs. VisionID supply us with the best in class scanning and vision systems from Cognex, these systems are used to ensure product traceability throughout the plant, and really are an invaluable asset when it comes to production. The support offered by VisionID’s professional service team is second to none, they offer us both remote and onsite maintenance for all of the technology that they deploy” David Lally, Buyer-Engineering, Boston Scientific Galway.